Today, I began a task much larger than I expected. I decided it was time to collect my poems into one place and have a good long look at the collection. Because a friend mentioned a poem I wrote in 2005, and I was searching through my 2005 archives, I decided to begin with that year and move backward and forward as time and tide permit.

Tomorrow is Marian's birthday, and despite my natural proclivity toward curmudgeonly behavior, I have to be nice to her...all day. We are hoping for decent weather, permitting at least the opportunity to dine out. We've both been entertaining what I call the "unsightly sniffles" for the last week or so, and pray for good sinus weather.

Despite a few sinus headaches and the occasional Klingon sneeze, my health has been good. I managed to spend nearly three hours clearing out the 16+ inches of snow we received by Tuesday morning with only a shovel and a scoop -- with no apparent negative consequences.

I am waiting on an new prescription for the anti-cancer drug I take...a stronger dosage so that I can begin tapering off some of my other medications. 25 more days will bring me to the end of my first year since the blood and marrow transplant on February 21, 2011. What a miracle!

A light from the past climbs the sky...

Buried in the original poetry from 2005 was a piece Marian and I discovered while foraging in the uncharted wasteland we call: Attic. The mysterious disappearance of poetry I wrote to my mother and the poetry she wrote to me from 1962 to 1990 has never been explained. Very little remains of anything prior to 1990 and the next ten years were fairly dry. Finding the handwritten poem, filed among correspondence and the packaged detritus of those years was a miracle. I include the poem and part of the introduction because it is one of the few examples of a free-verse meditation of the kind I often wrote to my mother. It broke my heart to read it again. 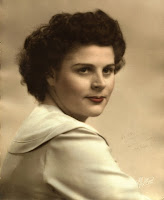 On May 6, 1990, my father and I were in a hospital room at Marquette General, watching my Mom as her breathing slowed and finally stopped. She died of a bacterial infection that swept through her body, putting her into a coma. She had completed more than a year's worth of chemotherapy and radiation treatments that left her unable to defend herself. What follows was my recollection of the thoughts streaming through my head and the pain searing through my heart, as we maintained her Death Watch.

Are you still there?
A helpless specter,
Adrift about your bedside,
A penitent, kneeling,
I caress your still hands.

Your hands were always cold:
Electric,
Blue ice flame -
Greeting me on my first day,
Silken cool touch on my fevered brow,
Holding my children,
Your touch a whisper.

Are you still there?
The cold seems deeper,
The flame all but gone:
Ice and wax
On a bed of snow.

Your eyes sang green,
To all who could bear
The hazel gaze.
Beacon-bright
Patches of green fire,
Alight among the seams
And lines of your life.

Are you still there?
The light has dimmed,
The flame all but gone,
I cannot see
Your evergreen fire.

Your voice was all I heard.
A sigh - a litany,
A song - a rainbow waterfall,
An ageless oracle.
I never thought
To listen for a breath -
A life sound.

Are you still there?
Each captive gale
Carries my heart
Adrift.
I dread the calm.

I hover above you,
A shadow of life.
My fingers scream to you,
Tracing rivers of fire.
My tears,
A gentle rain,
Calling forth life.

Warm lips I press
On icy brow.
Goodbye.
Your house is empty.
Adrift
On a bed of snow.

Are you still here?