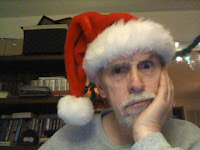 A Blare of Trumpets... and A Sour Note

I planned to end my updates for 2016 with a long list of blessings: I am still alive. I have family and friends who care about me. My grouching, grumping, and grousing have not yet alienated my wife and my kids (I think...). I am nearly off supplemental oxygen. I no longer take Sprycel ($10,000 per month). The list goes on...

An air ambulance emergency transfer to Rochester Methodist Hospital was not a positive development, and neither was the addition of another set of medical bill payments for the local hospitalization — a full year's worth of deductible and co-pays, all wrapped up in ribbon and string. Still, on balance, I felt good about 2016.

Then Comes the Sour Note

Three days ago, in the evening before bedtime, Amanda came charging down the stairs asking for basins, buckets, and bowls. The ceiling in her room had opened like the proverbial, biblical firmament. It was raining in her room! A search in the attic and crawl spaces showed no water reservoir, and there had never been a leak in the roof on the east side of our home. It is a protected section of our 12X12 roof (very steep). It sheds snow like crazy, and ice only develops on the very tips of the eaves, falling like miniature spears between our house the neighbor's garage.

I sped outdoors, expecting to spot where a satellite, meteorite, or flying pig had crashed through the roof, and found an amazing sight: Along an irregular, wandering line about a third of the way up to the peak, was a large ice dam, running from the front edge of the roof to the rear edge of the roof, with what looked to be up to a foot of snow piled above it. I'd never seen anything like it on either the eastern or western side of our upper roof.

We had replaced the western side in the last year with what little remained of our retirement funds, because it had been severely damaged by Keweenaw weather and prevailing winds. The eastern side was sheltered and was judged to be in great shape. Our attic is insulated and not heated. We had not changed our heating practices. So apparently, somehow the recent storms coming from the east and south east, the high winds, the warm days/wintry mix/freezing rain combination worked to create this meandering ice dam. Recent warmer days melted the snow, the ice dammed it up, and it found an entry point or two.

An emergency call to Dan Riutta Construction brought one of his workers yesterday, who gamely climbed a ladder from my neighbor's garage roof and used a sledge to hammer the ice dam to smithereens, and a roof rake to pull the snow down. How he was able to cling to a ladder in 30 mph winds and heavy lake effect snow is beyond me. I was outside for most of the time, and I am now paying for my indiscretion with flaring attacks of peripheral neuropathy and sore, irritated lungs. I have enough pins and needles in my feet and hands to supply a sewing shoppe.

Amanda's ceiling is a soggy and stained mess. It will be spring before I can test it for strength and begin to think about sealing and painting. I don't know what can be done about the roof. I hope the leaky spot can be identified and sealed with roofing compound.

I have no clue what the bill will be for snow and ice removal, but it sounds like a few more meals of cold cereal or PBJs may be in order during 2017.

Thanks for reading along. Goodnight and God bless!