It was only about 3 inches of new snow, but by golly, I grabbed the old scoop and cleared all three inches out of my driveway this afternoon! I know I looked ridiculous, all covered up and wearing a mask part of the time, stopping to gasp for breath every five minutes or so, and tottering about like an antique automaton — but when a half hour or so had passed, the snow was moved.

It is such an odd sensation, when small movements carry incredible consequences for my oxygen reserve. A life-long asthmatic, I can sense immediately when my oxygen level decreases even slightly. I know the progression from weakness and tingling in my extremities, to an unexplainable ache in my core, to a loss of focus, and finally the encroaching darkness as I begin to lose consciousness.

So when I work or exercise, I push until I begin to feel the loss, then I pull back, slow down, or stop until the tingling and weakness go away. It is a game of brinksmanship with a huge downside, but it is a necessary game to help retain some muscle tone in my major muscles. It's dancing on the brink of an abyss filled with a vacuum — one misstep and I get to try living without air for awhile — or forever.

This is nothing more nor less than the silent fear, the secret agony that shreds through the nerves of every child with severe asthma. I know the pain and fear of being smothered or of drowning (from the inside out), because I have walked that road thousands of times in my life.

In the sixth grade, we were outside for calisthenics and exercise. A new teacher started us running the circuit of the school yard. I stopped and told him I was asthmatic and could not run with the others, especially in the fall when my hay fever was bad. In 1961, there were no medications for asthma one could take as a preventative. He didn't believe me and ordered me to run.

So run I did. To my credit, I made three full circuits of the yard before I passed out, plowing face-first into the dirt — scattering dust and gravel all over his highly-polished new shoes. I came to almost immediately — I usually do, because once I pass out, the muscles in the chest relax and the weight of the atmosphere forces air into my lungs.

Now, I work with 27% lung capacity and the remnants left by damage done by bronchial asthma over nearly 58 years of coughing, choking, and gasping for air. Amazing how life comes full circle, and it is the small things you remember.

Other than the lung thingy, I seem to be doing quite well. I remain thankful for your prayers and good thoughts.

I have not written an update for awhile. Part of my reticence can be chalked up to fatigue. Each and every day is a gift, yet each and every day is a battle — fought with an enemy both unseen and inside. There is no tumor to scan, so that I might have an image at which to glare. There actually is no cancer (of which I am aware) to blame, as my Philadelphia chromosome positive, Chronic Myeloid Leukemia is in full remission — the blood tests cannot detect the fusion protein that causes the cancer. However, that does not mean it is gone...the tests may simply not be powerful enough to detect it. Therefore I take medication each day to block its return. 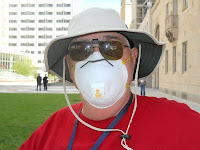 My medical problems spring largely from the blood and marrow transplant. The tiny warriors, those red-neck Tennessee T-Cells I received from my brother, Kevin, saved my life by wiping out any stray cancer cells and still police my blood stream for enemies. Unfortunately for me, their enemies list have included: my skin, my liver, my kidneys, and now my lungs. Quick and effective action by the BMT team at Mayo Clinic and Rochester Methodist Hospital saved my skin (it was literally coming off), my liver (renal failure), and my kidneys. All this happened within the first 100 days after transplant.

The lung attacks began without warning or detectable symptoms early in 2012. By April, 2012 my lung capacity was down to about 70%. By June, it was down to 27%. It has remained near that level since. Any infection becomes critical. If I get the flu, I go to the hospital.

Right now, I am fighting something that is causing severe coughing jags, but no fevers, etc. All my other numbers, for the white blood count, liver function, kidney function, hemoglobin, platelets, and neutrophils look very good.

My blood pressure appears to be under control (with medications) and my blood sugar usually behaves itself (no insulin needed). The peripheral neuropathy in my feet, legs, and hands appears to have stabilized. The cataract surgery by Dr. Leep on October 23 appears to be a resounding success. My vision is terrific for near and distance, but not up close (as is expected). The right eye healed nicely with no apparent problems. However, everything seems much brighter than before, making me grab for sunglasses much more often.

Our trip was better than I expected. We saw only four deer on the trip, however, two of them played chicken with my little Focus...and both were big enough to take out our windshield. Oddly, as I was driving east on M 28, about five miles east of Bruce Crossing, a fellow in a black pickup was tailgating me something awful. I mumbled something to Marian about wishing I could slam on the brakes to teach him a lesson. Five seconds later, a very large doe ran in front of my car -- barely 20 feet ahead -- and I had to slam on my brakes to avoid possible collision. The fellow in back stayed well back for a minute or two until he sped past me in a fog of salt dust, engine smoke, and chagrin.

The remainder of this update continues on my other blog: out of my mind: The Jag

Thank you all for your prayers and good thoughts.