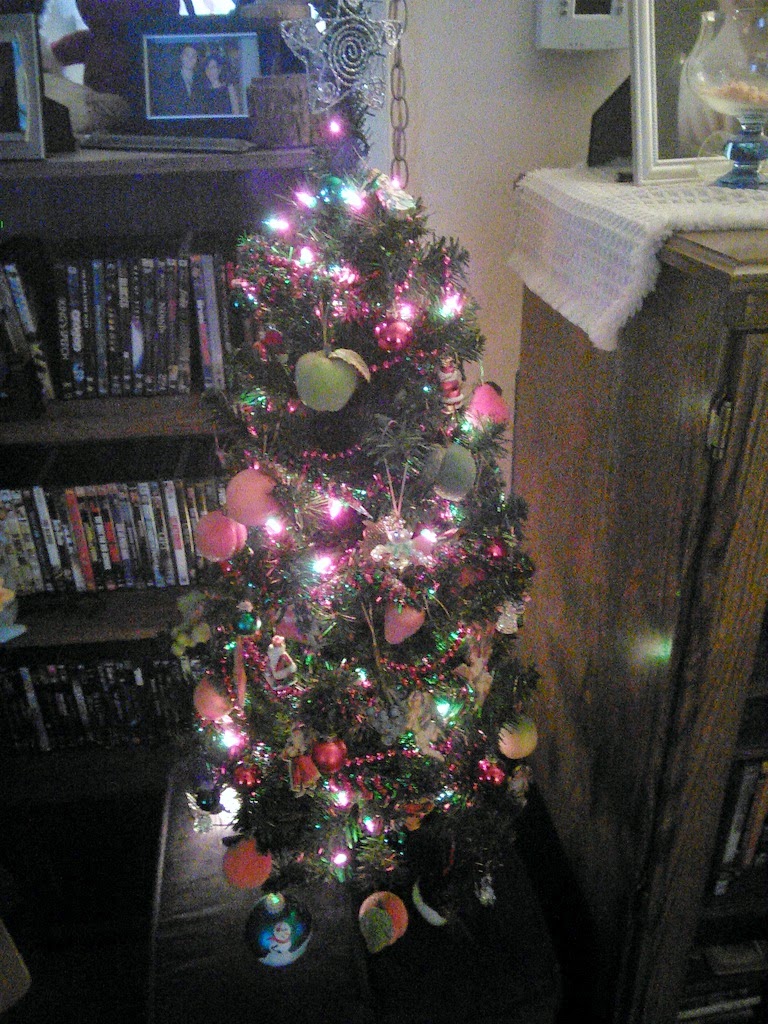 “Christmas time! That man must be a misanthrope indeed, in whose breast something like a jovial feeling is not roused— in whose mind some pleasant associations are not awakened— by the recurrence of Christmas.” ― Charles Dickens, Sketches by Boz

Merry Christmas! Well, Sort of…
For the second year, our Christmas tree is approximately 30 inches tall. In years past, we  decorated extensively, with lights in many windows and a six-foot tree decked out in hundreds of collected ornaments, each with a story or a memory attached. When we first moved here (36 years ago in October) I decorated outside the house. However, four straight years of vandalism by the Rubber Knife Gang and associates convinced me to decorate our windows from inside only.

As I was gazing at our diminutive decoration, I was suddenly swept away by a flood of memories. My mind's eye was filled with Technicolor, high definition, home movies: Younger versions of us were decorating the tree with whichever of the kids weren't yet too cool for Yule. One by one, they lost interest in our family Christmas traditions, and I believe began to view my fascination with them as quaint.

For a short time, our grandchildren shared the old-fashioned Christmas activities. However, they quickly moved on in this digital age, not wanting to be slowed down by ponderous old-time activities.

Way Back in the Olden Days
Gripped by overwhelming nostalgia, I flashed back to when I was smaller. It was at Christmas that I came closest to being a child. I don’t remember really being a child, just a miniature person with more medical problems and fewer privileges than I wanted. Usually, my siblings received toys and clothes for Christmas and birthdays. I received clothes, but my toys included: books, a chemistry set (and additional lab equipment), a microscope, a telescope, and a typewriter (because my handwriting sucked). These were great gifts (and expensive) and I quite literally wore them out, but I did it alone. It seemed I was on the fast track to be mayor of Sombertown.

At Christmas, my folks did more things with us, and there was always lots of great food, great decorations, and great music. The old black and white TV seemed brighter with holiday episodes of regular shows and musical guests on Ed Sullivan and Jackie Gleason. Even Lawrence Welk was tolerable at Christmas, though I could never figure out how his singers could sing so well while constantly showing all their teeth.

At Christmas, I felt more a part of the family than at any other time of the year. I was participant, not spectator. I could play, not just observe. It never lasted long enough.

The 1400
1400 days sounds so much greater than 1399! It amazes me that life goes on, despite battles with bugs and viruses; with allergies and asthma; with cold hands, numb feet, and side-effects. Our home has become a hidden hermitage, haunted by a hoary hermit -- an ancient curmudgeon afraid of viruses and bacteria, fearful of every fungus among us. I don’t think of myself as a hypochondriac, for the same reason I don’t believe you are paranoid if they really are out to get you.

I’ve had success avoiding illness by generally avoiding groups during flu and cold seasons. However, I fear the effects of keeping to myself so much and I try to sneak out once in awhile. As Dean Koontz wrote in Velocity: “A fine line separates the weary recluse from the fearful hermit. Finer still is the line between hermit and bitter misanthrope.”

I may keep my distance to avoid unnecessary visits to the hospital, but I pray hard not to become a hermit. I may be a curmudgeon, but I will endeavor to never be a misanthrope. In honor of this pledge, I wrote: A Hermit’s Christmas.

God bless and have a Merry Christmas and Happy New Year!